First of all, I would like to congratulate MP Son Chhay who are selected to monitor this task. MP Son Chhay is known for his work seniority, parliamentary knowledge, integrity, and political moderation.

According to this interview, the task of transformation CNRP from long-serving opposition party towards new vibrant alternative government-led party is pragmatic and effort-needed collective work. There are pragmatism, challenges, and solutions lying ahead of this effort.

Pragmatism
My previous recommendations on increasing anticipation on “culture of dialogue“, Sun Ray Policy, and building realistic platform for minority leader in the assembly, all are foreseeably achievable and effective after the political settlement incurred by confrontational political detente. The agreement to conduct in-dept reform of the National Election Committee, although it is not in a perfect shape, but at least new voters registration and the sharing power of 4 candidates from opposition party could solve this short-term fallacy of the NEC. The preparedness to play in field of those CNRP’s 55 law-makers were not in consistency. A new marriaged couple needs time to adapt. The brides and grooms were coming from different backgrounds as some are smoothly accustoming to the actual ground but some are brand-new to this new space. The later are likely perceived as hardliner activists which are visibly contradictory to dialogue and teamwork cooperation. Thus, all these differences have not constrainted CNRP from moving ahead and devolving its advancement. Opposition gained 55 seats or 26 seats increase in 2013 national election to become highest performance opposition party to sustain such outstanding incremental numbers with popular votes of nearly 3 millions or run shorter than the winner CPP around only 300,000 votes. The major voters are from urban and middle (income) classes of Cambodian population. This visible voter-location figure is significant for CNRP’s leadership to adjust its strategy from activism to pragmatism by using KPI (Key Performance Index) to analyse its law-makers and higher status members inside the party to insure highest expectation of work performance, to adjust public speech and political delivering focusing on more meaning on policy than personality or policy-oriented approach equipped by data-based analysis, and to undertake a policy of inclusiveness by including voters of Cambodians overseas and those current competent or technical individuals within the government when CNRP ascended to government-power leadership. The adopting of diversifying internal competent key leaders to prepare for different work accountability through shadowship cabinet arrangement is pragmatic. The building-up realistic and actual platform for minority leader of the assembly is a must to complying with the amended law of the Cambodia Constitution. Minority leader must not just be inscribed by the law, but he/she must be entitled to privileges and financial aids by the government.

Challenges
Recalling the shadow cabinet arrangement in accordance to democracy practices, MP Chheam Chany once was accused by PM Hun Sen because of his new title created among opposition party members to advance the critics on armed forces section of Cambodia. It was Hun Sen alone among leaders in this world who adopted democracy without allowing opposition to conduct its effective critics tasking and effective-embodied force to ensure maximum benefits for the nation. After 2013 election, the situation changed, as law adopted CNRP to be official opposition party and King nominated its president as minority leader for the parliament so it will depend on the opposition to utilize this provision at the fullest. Amid current crisis on judicial system perpetrated on broad-day light by the ACU, it has advocated more sympathies from the Cambodian people to look at the opposition party CNRP on its adherence to professionalism and high standard performance. It poses tremendous challenges for the party to roll on especially to build up effective think tank of criticism.

Solutions
Amid current excessive forces of attack, the preemptive bid opposition should carry out is “avihimsa or patience and non-cooperative” by strengthening its internal forces and co-opt new criticism approaches. Buddha said patience is supreme virtue of the wise; patience brings clear wisdom and road-map. Whenever, the contender tried to bring us to their arranged game, we should not cooperate with such dirty arranged game. And the most important one is to increase criticism through new tools of delivery. The function of opposition party is to critics the government-led party. Whenever, the works of criticism are disappeared, the opposition title shall be disappeared as well. But new criticism approaches must be adopted and enhanced. Scholars addressed effective criticism as positive, specific, objective, and constructive. Grouping expertise among those 55 law-makers through shadow government platform to solely work on their own specialization shall bring specific and objective inputs leading to positive and constructive changes. Those expertise must have platform such as blog, media or publication to publicize their works as well as for a monitor to easily follow up. Few minutes speech during parliamentary plenary session must come along with produced paper work that public media and voters are able to anticipate it without going through middle men or third persons. Public rhetorics should be objective, not subjective or specifying the issues (as really shortage), the affiliated body to such issue (accountable body), and recommendation (achievable solution framework). No excitement, anger voice, personal attacking, explicit vile (sometime level of tone), and be directive towards actual accountable body etc. are few tools to perform an effective criticism. For instance, ACU should be criticized for its abusing of power and mandate because this body should punish those corrupt high ranking officers who have been endorsed by the King under the provision of the Constitution, not a civilian, ordinary citizen, or members of civil society. ACU’s actions towards civil society members has surely complicated higher court of Cambodia and Ministry of Justice who have been abode by some levels of due process and public servant ethics. 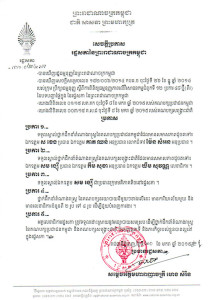