Last time, we heard about a youth of Charai tribe community wished to become Prime Minister by elaborating his step to achieve higher education first while he is in Bachelor degree cultivation. Today, we have heard a Khmer female youth born and raised in Siem Reap, Ms Kimsy Tor, claimed to becoming a first female minister of education. She is the first class student with grade A top during the nationwide exam in 2010 of high school students. She is from 10 January High School at the heart of Siem Reap town. Her dream is coming closer as she has already graduated Bachelor’s Degree in Maths from a well-known Manhattan College in New York. Now, she is going to pursue Master’s Degree and PhD in Mathematics in France with another scholarship. 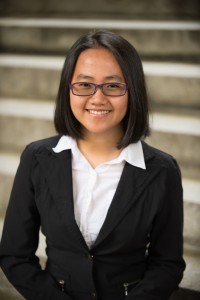 Ms Tor Kimsy who is the Grade A and champion of national exam of High School in 2010 is interviewed by RFI. She is wishing to become Minister of Education in Cambodia which shall be the first woman minister in this ministry. In previous interview, she wished to graduate PhD in Mathematics which is rare in Cambodia.

She were born and raised in Siem Reap. Her high school is 10 January 1979.

I want to see more youths have this dream to take in charge as they are the backbone of future Cambodia.

Read previous article about her

ខ្ញុំចប់ពីសាលា១០មករា៧៩ខេត្តសៀមរាបដែរ…កញ្ញាតោ គឹមសុី ជាជំនាន់ប្អូន…ខ្ញុំមានមោទនភាពចំពោះកញ្ញាខ្លាំងណាស់….សូមប្រសិទ្ធិពរអោយកញ្ញាបានជោគជ័យនូវរាល់បំណងស្វែងរកថ្នាក់បណ្ឌិតសិក្សា។
I also graduated form 10 January 1979 High School. I am proud of you Miss Kimsy Tor, wish you success in your graduate school effort. (from Sophoan Seng facebook)

Cambodian-born Kimsy Tor, a member of Manhattan College’s class of 2015, moved to the U.S. at the age of 18 to begin her freshman year in Riverdale, N.Y. Four years later, Tor will address her fellow classmates and their families as the 2015 valedictorian at the College’s 173rdCommencement on Sunday, May 17.

Tor graduates with a B.S. in mathematics and a minor in computer science. In the fall, she will move to Paris to pursue a Master of Science in mathematics at the prestigious Pierre and Marie Curie University, which is part of The Sorbonne University alliance. She hopes to pursue her Ph.D. in Paris and eventually return to Cambodia to teach, where approximately 10 residents hold doctorate degrees in mathematics. Subsequently, education is important to the development of Cambodia with an adult literacy rate of only 74 percent and two in 10 Cambodians living below the poverty line. Tor plans to make a difference in Cambodian education.