However, the two poles have come up with this new trend to maximize interests for Cambodian people but it doesn’t translate that each party has no hidden agenda to gain their own advantages.

For the CNRP, their advantages are to instill new paradigm of political pragmatism of democracy and sustainable development, but for the CPP is possibly to gear up split between the soft-liners and hard-liners among those CNRP’s supporters. The overwhelming supporters of the CNRP or those of more than half of the Cambodian population is a tasteful piece of cake but right now someone is trying to cut this one piece into several pieces or at least two pieces before the swallow into their throat.

On the other hand, Sam Rainsy has been regarded as the hero of the nation as he has always stood up to protest the hegemony and borderline trespassing of Vietnamese over Cambodia territory land, so his new approach to Culture of Dialogue has likely encouraged CPP’s politburo to do something to reduce his heroism and nationalism at the moment.

Lately, the development of “culture of dialogue” of the Cambodian National Rescue Party (CNRP) and the Cambodian People’s Party (CPP) has outreached to seven points of detente. Previously, each party issued guidance letter to their activists and grassroots levels. But this detente code of conduct for the two parties “Culture of Dialogue” might not be the last, or the beginning.

The Culture of Dialogue 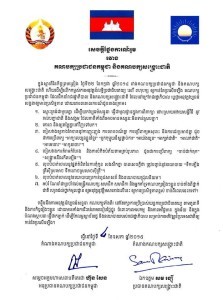 As previously written, “Culture of Dialogue” is not new in the context of daily use for common communication. Humankind has communicated with each other at least since the birth of human social establishment. But when this term has developed and evolved itself into more professional level, the Culture of Dialogue ideally means a norm or guidance of a shared exploration towards greater understanding, connection and possibility.

The dialogue consists of formal and informal. The following is considered formal dialogue of democracy:

The Culture of MAD Politics 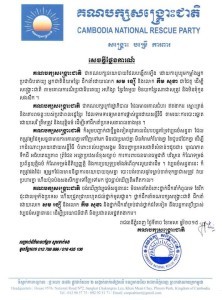 MAD is derived from “Mutually assured destruction, or mutual assured destruction” which has been likely extensively used by the military policy during the cold war and post-cold war. It has been theorized that a full-scale use of high-yielded weapons of mass destruction by two or more opposing rivals that would cause complete annihilation of both ie. the attacker and the defender, for instance, see pre-emptive nuclear strike and second strike.

In Cambodian context, this is in high alert of Lon Nol republican politics, Khmer Rouge revolutionary regime, and Vietnam socialist occupation over Cambodia.

The Seven Codes of Conduct for their Detente

According to the letter issuance signed by Hun Sen and Sam Rainsy, the seven codes are following:

END_OF_DOCUMENT_TOKEN_TO_BE_REPLACED

This part, Mr. Sophan Seng, articulated on 10 rules that all leaders have practiced and succeeded it fundamentally.