Paris Peace Agreement: The Peace and Freedom in the Context (Part III)

Among those frameworks of the Paris Peace Agreement, inclusive development and social equality are the front-page agenda. Like I mentioned previously, the peace, the freedom, and the policy of disarming and demobilizing have produced huge social odds. The economic development through free market and capitalism have transcended into crony capitalism and neo-patrimonialism. 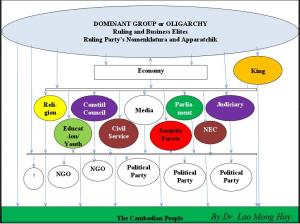 Further discussion to this slide of his, it is essential to hold “Public Debates” on in-dept reform of all fields that Cambodia government led by Prime Minister Hun Sen has ever promised with the Cambodian people. Answering to the question posting that “The elites are controlling the economy and the red security force (red box) is protecting them. So the obstacle is the non-neutral arm force, or guns that has still carried out the job to protect the dictator”; Dr. Lao Mong Hay inspired us to push for “Public Debates”  on this issue. He said “Indeed, our security forces including the the military and the police should be politically neutral and impartial. This political neutrality and impartiality should be extended to public servants, judges and prosecutors. It is hoped that one day, the affiliation to political parties and involvement in political activities of all these military and civilian officials will be constitutionally banned. It would be good if there were public debates on this issue, which could eventually come up with a proposal for this ban and a draft constitutional amendment to that effect. ”

While Prime Minister Hun Sen has promised to carry out in-dept reform in all fields such as Assembly, National Election Committee (NEC), Judiciary, Arm Force and Public Servants etc., one group called themselves “Pandits” are loudly speaking to appeal for the party’s reform by pushing both CPP and CNRP to reform its party structure in hope to develop more sound democracy. This latest movement has posed suspicion from all Cambodian people and democrats. The intent to help demolish the social mountain of Cambodia (Neo-Patrimonialism) with Prime Minister Hun Sen under the support of CNRP, at least, has been diverted by this new movement.

Watching this clip, the 98% of Cambodian population are farmer. The displacement to city like Poeuv is very unfortunate. Peouv was cheated and sold by a lady to another brothel. Her value is $1400 that she has no day to receive freedom from this amount of money. But her trap in Phnom Penh, at least, can afford to send monthly remittance to feed many lives in her family back home in Prey Veng. The movie has reflected the current displaced workers of Cambodia. The poor parents and siblings at home who cannot afford to earn $2 dollars a day, have placed high expectation on their displaced children regardless of what job and what position they have been working/holding. Peouv was shocked to hear his older sister flattered her of light skin and city-like figure. And she must bite teeth to avoid such painful city life revealing to her family.

In Cambodia, job means thing to keep one busy although she/he is playing cards, Ramvong dancing, singing, farming, ploughing, fetching water from the well, or lullabying a baby etc. After disarming, Sovanna worked with various jobs such as boxer, beer and ice server at the wedding party, pork meat-cutter, and farming etc. Those described jobs have no pension plan, no injury insurance, sick leave, benefits and security at all. Sovanna was mocked by his friend that he cannot earn $2 dollar a day how could he afford a girl to be his wife; and the beside sitting girl can earn up to $100 a day.

Paris Peace Agreement has brought in international currency to develop economy of this country. Trillions of dollar has been promised by the signatory parties and each year, at least, 600 millions handed over to the Cambodian government and the civil society. But life has changed with opposing direction: the rich and powerful people have become more rich and more powerful; the poor and farmers have become victim of free market economic and so-called development. Forced eviction by the elites to paving way for land speculation and concession has become unbearable. National dept has been increased while the pay-back interest is at low ratio.

The social gap and disparity have been so worried during this 23 years after the Paris Peace Agreement!