CNRP, CPP and the Court during this few days political tension

Now, it is time for the CNRP MPs and especially those high ranking MPs such as the First Vice President of the Assembly, the Chairs of the Committees, and the Vice Chair of the Committees must work harder to protect the nation interest and its supporters through all those due processes allowing within the Assembly. Once, we were happy to hear Vice President of the Assembly led by MP Kem Sokha to interrogate Prime Minister Hun Sen at the Assembly on many wrong doing things including voting in favor by the Assembly Members in which the Assembly has reserved full power in doing this. If not the PM being questioned in the Assembly, the Minister especially the Minister of Justice who has directly handled with all impunity and jailing, she/he must be invited to the Assembly for interrogating and questioning, and if the evidences are lucrative he/she should be voted in favor by the assembly from both parties, at the earliest.

CNRP and CPP are desperate during these few days while the increasing tension of political environment in Cambodia struck by the arresting and in-jailing many CNRP’s activists and land activists. Worse than this is the unknown authority forcefully defrocked the three monks to pave way for the court to order jailing conviction without conducting due process.

When the CNRP issued letter to demanding and condemning CPP for their conspiracy as the government party of neglecting the abusing of power by the authority and the court, the CPP has quickly reacted with their always statement “strengthening the rule of laws including fighting against the impunity”. They emphasized that the authority and court are independent body from the government and the party.

In Cambodia, the three motto “Nation Religion King” is the highest institution in paralleling to the Constitution which is the source of power enabling the legitimacy of the Assembly, the Court and the Executives, in accordance to the administrative system of Liberal and Plural Democratic Governance inscribed within the CONSTITUTION mandated since 1993, first democratic election sponsored by the UNs.

The recent action of lower and authority to forcefully defrock the three monks and put them in jail with the conviction order of the Executor and Judge, has been seen a grave violation over the Buddhist institution (Religion), the national Constitution and Universal Declaration of Human Rights especially the national motto: NATION, RELIGION, KING. 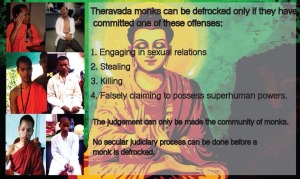 The Cambodia National Constitution inscribed that Buddhism is the State Religion. To defrock the three monks without respecting to the existing laws, due processes and Buddhist Vinaya is a grave offending of the fame and dignity of this nation. The issues and schemes (អធិករ) of the Bhikkhu monks must be deliberately resolved by the Buddhist Sangha: preceptor (ព្រះគ្រូឧបជ្ឈា), Vinaya leader (វិន័យធរ), Chief Monk of Province (មេគណ), Chief Monk of District (អនុគណ), Supreme Patriarch (ព្រះសង្ឃរាជ) and the Sangha (គណសង្ឃ). There are different levels of offending. The gross offending of the Bhikkhu monks towards the Vinaya are four Parajika (បរាជិក៤) i.e. having found of sexual intimacy(សេពមេថុនធម្ម), killing of others (សំឡាប់អ្នកដទៃ), stealing of eligible amount of other asset (លួចទ្រព្យគេ៤មាសកៈឡើងទៅ), and claiming Enlightenment in which one doesn’t really attain it (អួតឧត្តរិមនុស្សធម្ម). When the secular authority found guilty on monks who violated the laws and orders, the civil authority must consult or bring the case to the Sangha, so that the Sangha can solve the issue including to disrobe if the violation could be convicted to jailing term. To be retired from a monkhood is at the same procedures to becoming a monkhood.

Becoming a Monk
• To become a novice (samanera) all that is needed is to approach a monk of at least 10 years standing and ask to be accepted. After undertaking several years training and being at least 20 years old the novice is qualified to be a fully ordained monk. To do this he must approach an assembly of 10 monks each of at least 10 years standing who are respected for their virtue and learning. The candidate is then asked 11 questions to determine his suitability. (1) Are you free from disease? (2) Are you a human? (3) Are
you a male? (4) Are you a free man? (5) Are you free from debt? (6) Do you have any obligations to the state? (7) Do you have your parent’s permission? (8) Are you at least 20 years of age (9) Do you have your robe and towel? (10) What is your name? (11) What is your teacher’s name? If the candidate answers these questions satisfactorily and if no objections are raised by the assembly, he is considered to be a fully ordained monk
(Bhikku). A monk can use property belonging jointly to the sangha but he himself is supposed to own only eight things – three robes, an alms bowl, a razor, needle and thread, belt, and a strainer to purify drinking water. He is also obliged to abide by the 227 rules contained in the Vinaya Pitaka.

The tension has arisen during the celebration of the Free Impunity Day and the arriving Human Rights Day of December 10 this year. But what the observers and reporters wrote and analysed the most is the culture of intimation and political pressure from the Cambodian’s People Party (CPP) that they successfully arrested and jailed members of parliament of the CNRP in order to cancelling the assembly boycott of the opposition MPs.

However, the recent pre-emptive action against the CNRP is an illustration of political dichotomy of: violence and non-violence, culture of dialogue and culture of threat, etc. During the boycotting to legitimize the government led by the CPP, the CNRP MPs learnt bitter lesson of this arresting, handcuffing and jailing. So after entering the assembly, it should be a hope these 55 MPs should take action to bring this case to their action plan as a primary agenda. Actually, there are many agendas on the table that are very important. Among those agendas is the Reform of the National Election Committee. But like everyone has perceived, the NEC reform agreed on the 22 July 2014 was not in good detailed written but it has been in good spirit to speed up for the achieving result all democrats expected, it is not only one heuristic mechanism to solve the overall problems of Cambodia.

According to the interview on Khmer Post recently, MP Mu Sochua expected to having more responsible government officials to face with the interrogating by the assembly members. Like MP Long Ry, the vice chair of the defense and national security of the assembly shall swiftly ask those involved authority to clarify at the assembly on beating and harassing those land activists, and particularly on defrocking the three monks. MPs Son Chay also provided some clue he has gone through on the disclosing of patronage system in handling with the corruption in the assembly and he might face the displacement from the post or dis-favoritism by the bureaucrats. He pointed out that according to the laws, the president of the assembly and the higher ranking of the assembly such as the vice presidents can initiate to interrogating and questioning those Ministers as well as the Prime Minister to be accountable on their own actions in handling with injustice, impunity, corruption and violation over the rule of laws of Cambodia.

We have seen some strong movement of the CNRP MPs in knowing their status, their power, their duty and their active engagement to strengthen the Rule of Laws within the Assembly. But many observers especially the members and supporters of the CNRP are still seeing ineffective in framing its action plan, MPs performance and seemingly few groups are working hard while others are very silent.

Now, it is time for the CNRP MPs and especially those high ranking MPs such as the First Vice President of the Assembly, the Chairs of the Committees, and the Vice Chair of the Committees must work harder to protect the nation interest and its supporters through all those due processes allowing within the Assembly. Once, we were happy to hear Vice President of the Assembly led by MP Kem Sokha to interrogate Prime Minister Hun Sen at the Assembly on many wrong doing things including voting in favor by the Assembly Members in which the Assembly has reserved full power in doing this. If not the PM being questioned in the Assembly, the Minister especially the Minister of Justice who has directly handled with all impunity and jailing, she/he must be invited to the Assembly for interrogating and questioning, and if the evidences are lucrative he/she should be voted in favor by the assembly from both parties, at the earliest.

There are many directions that the CNRP MPs can speed up in-dept reform for the interest of Cambodia nation. The NEC is just one of them and CNRP must not walk like the tortoise step at all. CNRP MPs must not be cool-blooded or too passive pacifistic in handling with injustice and bogging down by their political rivalry. The concept of non-violence and culture of dialogue could be achieved only through active engagement in crafting and strengthening the rule of laws, the impartial court system, and the independent civil servants including the arm-force.

The power is already in the hand for the CNRP MPs to effectively use it. CPP has already supported this process to end the culture of impunity and to strengthen the Rule of Laws. This recent cracking down of the supporters of democratic value is not viral to dismantling the bonding, but to empower the bonding becoming more precisely, effectively and due diligently. The rhetoric solely cannot help anything to the survival of the democrats.

Below are some video clips to supplement this analysis:

1. RFA’s Public Discussion Program on 14 November 2014 to learn more about the due processes on solving Bhikkhu schemes.

2. RFI’s interviewing of Phay Siphan on the latest stance of the government and the CPP on the issue.

3. Last clip of RFA’s Public Discussion of MP Son Chay on tasks he is doing and the clue that Assembly can do to stop the ongoing social injustice and impunity.

Spread the love
Posted in Culture, Economics, Education, Internet, Leadership, Politics, Researches | Comments Off on CNRP, CPP and the Court during this few days political tension