In democratic countries, their vocal messages are: the people must hold government accountable and responsible, in which the government cabinet is answerable to, and removable by, the majority of parliamentarian.

Recent development of Cambodia politics has emerged two pressing issues  considerable to this article: 1. the statement by HE Sam Rainsy on his page on “A Political Legacy for Future Generations”; 2. PM Hun Sen’s speech at the Graduation Ceremony by articulating on 12 imbalancing issues of Cambodia. 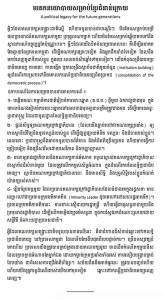 As agreed by closed door meeting to end deadlock on the different opinions of National Election Candidates, the loose some gain some approaches from both parties, have come to an end of approving and guaranteeing to: 1. receiving TV and Radio license for the opposition CNRP, 2. amending internal rule of national assembly in article 48 (new) to recognize new status of opposition party leader as “Official Opposition” entitling the minority leader with privileges and position paralleling to  Prime Minister (we have not known how much this Minority Leader status can resume privileges and power but PM Hun Sen has already said the position is not bestowed by the King and he/she can not command arm-force and execute the executive cabinet etc) 3. the deadline to approve the new NEC is no later than February 2015.

There are different arguments on how this approach can boost Institution Building? As the matter of fact, opposition(s) in Cambodia has long marched in its uphill journey in Cambodia’s history. Many leaders, as observed, have developed their political agenda by privatizing and monopolizing power for himself/herself by strengthening their party inside the government, rather than employing long-sighted vision to build a fruitful political party system inclusive for all. In the past, the opposition parties were shortages in several means to strengthen itself as the responsible and answerable force (in criticizing crusades) towards the government for the genuine development of Cambodia. Those shortages are variable including financial support, media channels, true partnering bond within the assembly, and much more etc.

The means to access to strengthening the opposition is truly one of the foundations towards “Institution Building” in Cambodia. FYI, Cambodia has no record of Opposition has become Government through Free and Fair Election at all. 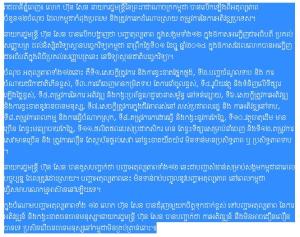 These 12 imbalances or mismatches are truly happening in Cambodia and it has been well positioning in this country ever since while the political rhetoric has been fully coloring in the screen. Hence, the statement of Prime Minister has provoked our thought on how we can establish “Institution Building” in Cambodia? To solve problems all those imbalances/mismatches mean Cambodia can boost its strong Institution.

Pragmatism is not at Place