Culture of Dialogue in Cambodian Context

His Holiness the Dalai Lama
in a speech to the “Forum 2000” Conference,
Prague, Czech Republic, 4 September 1997

During this few weeks, the term “Culture of Dialogue” has been publicly conceptualized and verbalized. The two prominent leaders of Cambodia ie. Prime Minister Hun Sen of government leadership, and HE Sam Rainsy of main opposition CNRP leadership, have transformed the coinage of this term into tangible implementation. This term is rare in Cambodia politics to be heard and convinced by the Khmer politicians. Sometime, we have heard about it but not at the intention of implanting it concretely or making it a grand policy by the Cambodian leaders. 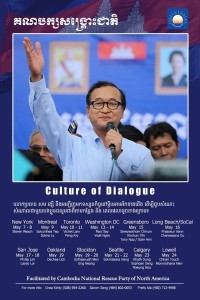 “Culture of Dialogue” is not new in the context of daily use for common communication. Humankind has communicated with each other at least since the birth of human social establishment. But when this term has developed and evolved itself into more professional level, the Culture of Dialogue ideally means a norm or guidance of a shared exploration towards greater understanding, connection and possibility.

Considering the dilemma of embedded human conflicts, which Aristotle formalized human beings are “social animals”, the World War I and World War II is the testament of this conflict nature, but Enlightenment theory such as Buddha and Voltaire before Christian era and during the 16th century, had paved foundation for the world’s leaders to halting confrontational nature by using diplomatic means of dialogue to completely end the war and to shake hand for shared responsibility and collective development.

For Cambodia, we have developed this dialogue during the post-colonial

politics. Sangkum Reastre Niyum led by King Norodom Sihanouk was merely a domestic “dialogue” while his foreign policy as a non-aligned country is considered a dialogue approach. But that non-alignment policy was staying on a ridge in between two tigers: USA and China. The slippery ridge finally knocked Cambodia down to the bottom line of catastrophe during 1970 to 1990. During the effort to bring about national reconciliation and peace mediated by the United Nations, the Paris Peace Agreement was crafted, that was all achieved by “Culture of Dialogue”. But this culture has considerably faded away after that.

After the 2013 election, the embodiment of this culture promoted by HE Sam Rainsy and positively responded by Prime Minister Hun Sen has seen as the cornerstone for democratization and sustainable development in Cambodia if the two leaders shall always respect their speech and action, with no tricks in it and coercion to exploit this great grant policy.

What should be done in general context

According to co-intelligence.org, there are sorts of dialogue dictated following:

The Culture of Dialogue is the Conversation of Democracy

At least, there are four levels of  talk in bolstering democracy. They are following:

There are concerns that the new crafting of “Culture of Dialogue” warmly welcomed by Prime Minister Hun Sen is a political innovation of this party to avoid further decline of its popularity among Cambodian people and young voters. The Cambodia People’s Party (CPP) has tested the mentality and sensitivity of Cambodian people about how they regards the CPP and Vietnamese imperialism over Cambodia territory sovereign integrity and its independence. While the CPP has been created and sustained by the Vietnamese politics, the test happened several times but it has been significant in the year that opposition leader Sam Rainsy was unhappy with the border wooden sign that Vietnam and Cambodia marked it as their agreed border line but villagers asked the opposition leader for help to claim their farm land back. His act of uprooting this wooden pole irritated Vietnamese government. Vietnamese government also expressed their irritation directly towards the Cambodian government to take action against Sam Rainsy. As the result, the court of Cambodia convicted Sam Rainsy in absentia to jailing him up to 4 years. He was living in self-exiled in France ever since.

But prior to 7 days before national election in July 2013, the return of Sam Rainsy was historically greeted by million of Cambodian people visibly emerged as young voters and youths. This crowd of people tsunamic to greet the political leader has never been seen centuries of Cambodia politics (reading more historical greeting and HE Sam Rainsy kneeled down to kiss his motherland).

In this prospect, some observers have presumed that the louder criticism from the CNRP on linking of CPP with the Vietnamese imperialism shall deteriorate the short life span of this party. Or on the other hand, the tests on Vietnamese influence on Cambodia politics has never been successful over Cambodian patriots and nationalism. So the new method must be used.

Cambodia’s Political Dialogue: a new culture of pragmatism for the present and future of this country

Many Cambodian people have supported this “Culture of Dialogue”. Mr. Pa Ngoun Teang, manager of CCM a freedom of media civil society advocate wrote to Prime Minister Hun Sen to express his support and encouraged the PM to conduct genuine in-dept reform for the interests of the nation. A letter responded back to HE Sam Rainsy from a CNRP Chapter of Calgary of Canada wrote lengthy of support and recommendation. Some of them are following:

1. Culture of Dialogue shall prepare the pathway for government leadership of the CNRP.

2. Culture of Dialogue shall prepare the arena of political debate among premiership candidate, members of parliament, and local government members.

4. Culture of Dialogue shall convince stability, non-violence, sustainable development, and mutual understanding among Khmer citizens and their key leaders.

5. Culture of Dialogue shall ensure the effective work of the National Election Committee (NEC) to implement their tasks successfully.

1. The pursuit of the Culture of Dialogue is not only necessary for the opposition party, but a transformation of a real and a new vibrant opposition party in Cambodia. A “Real Opposition” means this party has not joint the government in coalition but a partner to ensure genuine democratization, check and balance, and the strengthening the rule of law. A “New Vibrant Opposition” means the 55 law-makers has remarkably made this Wonder House (Assembly) work effectively under the current provision of laws and national constitution. 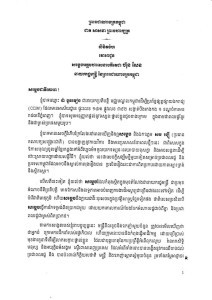 2. The pursuit of the Culture of Dialogue shall not loss sight as many concurrent national issues shall be addressed effectively such as the national sovereign integrity and illegal immigrants, the increase of Key Performance Index (KPI) and genuine reforms in all fields, the halt of power abuses and corruption by the powerful, the equal share of national wealth and poor-pro policy, the creation of judiciary laws which can promote a better and just court system, opening more space for civil society to achieve their civil rights framework, sound democratic system and achievable human rights endeavors, etc.

Hence, the “Culture of Dialogue” shall loss sight if the government 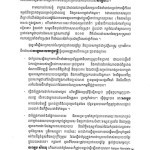 partner has no honesty in it. While the Dialogue can work well within the Assembly, but it shall not generally work well within the Executive and the Court. But we are very proud of your solemn proclamation which was giving interview to the media during the 40 years remembrance of the Khmer Rouge atrocity held by the CNRP at Choeung Ek mass graves that Hun Sen and Louk Prothean have 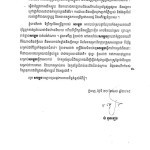 assured that if violence happened in this country, only two persons ie. Hun Sen and Sam Rainsy shall be responsible. Hun Sen public speech on “Culture of Dialogue” in several occasions and this affirmation among the repeated speeches from Louk Prothean is the social insurance for all Cambodian people.

In conclusion, it is to early to state this new culture of dialogue would be good or bad for Cambodia because this policy is like a waking-up call. But its prospects and its pragmatism shall be beneficial to this country if both sides are honestly implementing this new political commodity without prejudice.