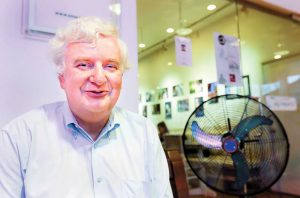 This is the decade after Vietnamese  troops expelled  the Khmer Rouge from Phnom Penh, on January 7, 1979. For another 10 years, Cambodia was run virtually as a Vietnamese colony, until September 1989, when the last Vietnamese troops left Cambodia.

Today, none of the major players has any incentive to open archives for historians.

In Vietnam, the Communist Party of Vietnam continues it unbroken hold on power. In Moscow, Soviet KGB archives have been sealed on orders of President Putin, a former KGB colonel.

Bernd Schaefer, a German historian of the Cold War era, has found a unique end run around this history blackout.

He studies the East German secret police and diplomatic files on Cambodia and Vietnam during this hidden decade.

Next to the Soviet KGB, East Germany’s Stasi secret police was the main training partner of Vietnam’s secret police.  In 1978, Vietnam became a full member of the

Soviet Union’s COMECON economic bloc and signed a friendship treaty with Moscow. Until the collapse of communist East Germany in 1990, its diplomats had wide access to political reporting from Communist ambassadors stationed in Hanoi and Phnom Penh.

Every year, Schaefer, a senior scholar with the Woodrow Wilson International Center’s Cold War International History Project in Washington, travels to Phnom Penh to lecture on Cambodian history at Meta House. Between lectures, he sat down at Villa Langka for an extensive interview with the Khmer Times.

Why did Vietnam invade Cambodia in December 1978?

“From the East German files I have seen, from early 1978 on, the Vietnamese were committed to replace him, to get rid of Pol Pot, and to get a sympathetic government in Phnom Penh,” said Schaefer. “In Hanoi’s eyes, a government friendly to Vietnam was absolutely essential to the security of Vietnam.”

Holding Vietnam back was fear of a military reaction by China, the primary geopolitical ally of the Khmer Rouge.

“They were afraid that if Vietnam moved into Cambodia, then the Chinese would move into Vietnam, and then you would have a two front war,” said Schaefer, referring to East German diplomatic cables.

In December, 1977, a half-hearted invasion of Cambodia by Vietnam raised the specter in Hanoi of Vietnamese soldiers fighting Chinese soldiers in Cambodia.

“They captured a lot of advisors from China and North Korea, and they extrapolated what were a lot of Chinese soldiers in Cambodia,” Schaefer said of the December 1977 invasion, which stopped 38 kilometers short of Phnom Penh. “Later, when the Vietnamese actually did invade, many of the Chinese they thought were troops were actually construction workers, advisors. And they did not put up a fight.”

Through 1978, the Khmer Rouge continued to attack Vietnamese border towns, and the Vietnamese plotted the timing of a fullscale invasion. They chose a time when China’s leadership was distracted.

The Vietnamese invaded on Dec. 25, 1978, right after a highly divisive Chinese Communist Party plenary session in Beijing. In addition to this distraction, China’s paramount leader of the time, Deng Xiaoping,  was preparing to normalize China’s relations with the United States on Jan. 1, 1979, and to make a groundbreaking trip to the United States on Jan. 29. Hanoi seized this window. Its troops reached Phnom Penh in 13 days, on Jan. 7. The West was largely distracted with Christmas and New Year’s holidays.

Among the Khmer Rouge defectors brought to Phnom Penh in January 1979, was Hun Sen, Cambodia’s future prime minister. During seven years fighting with the Khmer Rouge, Hun Sen had risen to the rank of Eastern Battalion Commander. In June, 1977 he fled with his cadres to Vietnam.

Schaefer said the Vietnamese constantly complained over the years to their East German partners that it was hard to determine the real backgrounds of Khmer defectors in exile or cadres volunteering for work in Vietnamese-occupied Cambodia.

“I find many times in the files that the Vietnamese say it is so hard to figure who these Cambodians really are,” Schaefer said. “Because their files have been destroyed. They make up all kinds of stories. It is very hard to tell who is who.”

As a leader of the Vietnamese-sponsored rebel army, Hun Sen was appointed Deputy Prime Minister of the Vietnamese-installed People’s Republic of Kampuchea.
Initially, Hun Sen appears rarely in files that Schaefer read. In 1981, he briefed Communist bloc ambassadors that a Cambodian government member had been purged and detained by the Vietnamese “for not fulfilling his internationalist duties.”

“Fulfilling internationalist duties” was a code phrase for fully cooperating with Vietnam. Cambodian “nationalism” as defined by Vietnam meant opposition to Vietnam’s occupation.

The East German files, Schaefer said, indicate that through much of the 1980s, Vietnam  administered Cambodia like a colony.

“At one point, the Cambodian state security minister directly approached the East German Stasi  for logistical help,” Schaefer said. “A Stasi official wrote:  ‘We cannot do it bilaterally.’”

“The East Germans were aware that if they tried to give the Cambodians something without knowledge of the Vietnamese, the Vietnamese would have been very much irked by that,” said Schaefer, who grew up in West Germany. “The Vietnamese were very controlling and wanted to get everything going to Cambodia to go through them.”

“The East Germans are saying the Cambodians are just coming up with demands and demands, and they just take for granted that the richer Socialist partner will supply it as it is their internationalist duty to supply it,” Schaefer said, referring to the roots of the Cambodian government’s penchant for foreign aid.

“This goes back to the Vietnamese advisors in the Kampuchean Government,” he said, paraphrasing analysis in the East German files. “This is exactly how the Vietnamese have dealt with us for long. The Vietnamese, during the war, and after the war, always demanded and demanded. And we have to deliver because we have to do it and we can afford. It is part of our internationalist duty.”

“When the Cambodians did the same, the East Germans traced this back to their Vietnamese advisors,” said Schaefer. “This is Vietnamese policy: just ask, ask, and ask for all kinds of material aid, arms. The Cambodians are doing exactly the same. They say: “We are told by the Vietnamese: this is how it works, you go to richer allies and ask.”

As deputy foreign minister, Hun Sen visited East Germany in the 1980s. He appears to have been aware of the implications on Southeast Asia of Mikhail Gorbachev’s opening policy, and the loosening of Moscow’s hold on the Soviet empire. Ambassadors of hard line East bloc communist nations suspected that in the late 1980s, Hun Sen was distancing himself from Vietnam and Moscow.

“Hun Sen surprises the other socialist ambassadors in that he goes so far, that he shows he is no longer under Vietnamese control,” Schaefer said, citing East German files.

This maneuvering was the start of long, opportunistic migration for Cambodia under Hun Sen.

Today, 35 years after he entered Phnom Penh alongside Vietnamese troops, Hun Sen maintains a policy of good relations with Vietnam, but not to the extent of supporting Vietnam in its dispute with China over territorial claims in the South China Sea. China long ago displaced Vietnam as Cambodia’s largest foreign investor and source of foreign aid.

For the 70 percent of Cambodians born after Vietnamese invasion of 1978-79, much of this may seem like ancient history.

Only Vietnam Moved On Khmer Rouge

In contemporary Cambodia, the political opposition takes a strong anti-Vietnamese stance. Schaefer says that modern politics blind many young Cambodians to the realities of 1978, a time when no end was in sight to the Khmer Rouge nightmare.

“I have to explain that, yes, it was the Vietnamese,” Schaefer said of his history lectures here. “Almost everyone was aware what was happening here. But, for geopolitical reasons, no one did anything. The US knew a lot through their embassy in Thailand. They knew the Khmer Rouge story, but they did not act. The thinking was: it is better to have an anti-Vietnam government in Cambodia.”

And, he added, the Vietnamese did not attack the Khmer Rouge for humanitarian reasons.

Living in a neighborhood of rising and falling big powers – French, American, Vietnamese, and now Chinese – Cambodia’s leaders have always wrestled with one constant – the need to get the geopolitics right.

Spread the love
Posted in Education, Leadership, Politics, Researches, Social | Comments Off on Why Did Vietnam Overthrow the Khmer Rouge in 1978?
Tags: 7 January Day, Geopolitics, January 7 1979