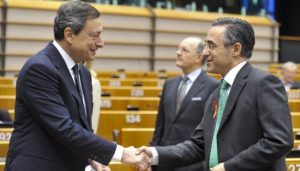 European Parliamentarian Ramon Tremosa (left) at a meeting in Brussels in 2011. Tremosa and a number of other EP members formed a bloc called Group in Support of Democracy in Cambodia this week. Convergencia Democratica de Catalunya/Flickr

Members of the European Parliament and the Inter-Parliamentary Union (IPU) condemned what they see as a crackdown on the opposition Cambodia National Rescue Party by the ruling Cambodian People’s Party ahead of commune and national elections.

In Bangladesh on Wednesday, an IPU assembly, which represents 171 countries, adopted a resolution calling attention to the arrest, persecution and suspension from the National Assembly of members of the opposition.

“The IPU is alarmed at the escalating harassment of members of the opposition in Cambodia,” the IPU’s statement reads. “The Organization is also concerned at the prospect that one opposition party, the Cambodian National Rescue Party, may be dissolved and not allowed to take part in the upcoming election.”

The newly adopted Law on Political Parties gave authorities the power to dissolve any political party that violates a law or threatens national unity or security. The law is widely viewed as having granted the CPP the legal tools to dissolve arbitrarily any serious political threat.

In a Facebook post on Wednesday, former opposition leader Sam Rainsy said the IPU’s statement demonstrates that union members believe there is a lack of political will on the part of Cambodian authorities to resolve human rights violations.

“[IPU] considers it crucial for the CNRP to be able to stand in the upcoming elections,” Rainsy wrote.