How to fight back against a dictator, according to an exiled democracy activist

When a country has a strongman for a ruler, an army at his disposal, and control of the media, how can the people fight back? 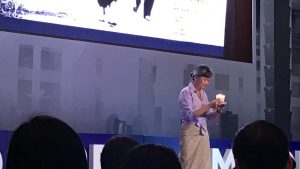 You go after the one thing he does not have: legitimacy.

That’s the strategy of the Cambodia National Rescue Party (CNRP), an opposition party banned for its threat to Asia’s longest-serving prime minister, Hun Sen, said Mu Sochua, one of its leaders in exile.

“We are not just opposition,” she said at the Oslo Freedom Forum yesterday (Nov. 10) in Taipei. “We are the hope of Cambodia.”

Ahead of Cambodia’s elections earlier this year—where the outcome was known well ahead—Hun Sen did what he could to pad his victory. He had the top court disband the CNRP, and jailed human-rights activists, journalists, and critics, including the opposition party’s leader Kem Sokha.

According to the National Election Commission, voter turnout for July’s general election was 80.5%, higher than the last general election in 2013, when turnout was 69.6%. The groups that monitored the elections were closely tied to Hun Sen, however, with one headed by one of his sons. Hun Sen is grooming his sons to take over in what will likely become, in essence, a hereditary dictatorship.

Mu Sochua, once a member of Cambodia’s national assembly, had served as the minister of women’s and veterans’ affairs for Hun Sen’s government until she resigned in 2004. “I was proud to be a leader of the Cambodian women, but I was not proud to work for a government that was so corrupt,” she said.Because of Hun Sen’s stronghold on the armed forces and media, she said, it’s up to people outside the country to fight for reform. All over the world, overseas Cambodians are continuing the campaign to delegitimize Hun Sen.

“Whenever he goes outside Cambodia, he is met with protestors—Cambodians living abroad,” she noted.

Ahead of a trip to Australia in March, Hun Sen had warned Cambodian-Australians, who were planning to burn an effigy of him: “I will follow you all the way to your doorstep and beat you right there… I can use violence against you.”

But these threats aren’t deterring Mu Sochua, who believes international pressure is the most viable way to free Kem Sokha and bring change.

“We outside in exile or Cambodian workers in South Korea, Japan, people in France, everywhere—Mr. Hun Sen has a message from us: You are not the legitimate leader of Cambodia. We want real change,” she said.

Spread the love
Posted in Culture, Economics, Education, Internet, Leadership, Politics, Researches, Social | Comments Off on How to fight back against a dictator, according to an exiled democracy activist
Tags: Hun Sen illegitimacy