Cambodian Prime Minister Hun Sen is continuing to push the limits of personal power consolidation. While his strategies have been highly successful so far, they are likely to result in greater political insecurity in Cambodia. 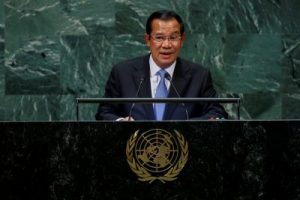 Several concerning developments have emerged in 2018. Since the Supreme Court banned the main opposition party — the Cambodia National Rescue Party, or CNRP — in November 2017, Hun Sen has further consolidated his power by appointing family members to top government positions.

Some of these promotions were of his children. For instance, in late 2017 Hun Sen appointed his third son, Hun Manith, as General Director of the General Directorate of Intelligence, a new intelligence unit designed to train spies for combat against terrorists and any suspected threat from ‘revolutionary’ forces. Hun Sen also promoted his son-in-law, Dy Vichea — former head of the Ministry of Interior’s Central Security Department — to Deputy Chief of the National Police. Most importantly, Hun Sen elevated his eldest son Lieutenant General Hun Manet as a General (four star) following his promotion to Deputy Commander in Chief of the Royal Cambodian Armed Forces (RCAF).

These tactical moves are part of the Prime Minister’s long-term strategy to consolidate power, which has been in place since he removed his then co-prime minister, Norodom Ranariddh, from power in July 1997. Hun Sen has used coercive means to tighten political control over state institutions and co-opt loyal followers. Hun Sen now maintains tight control over the judiciary and electoral processes at both the local and national level and his party, the Cambodian People Party (CPP), dominates the bicameral legislature.

Why has Hun Sen carried out these tactical moves? For some commentators, they are simply a part of Cambodia’s entrenched political culture of authoritarianism, nepotism and patrimonialism. While there is some truth to this way of looking at Cambodian politics, it overlooks Cambodian leaders’ deep sense of insecurity, which drives them to weaken opposition forces by all means necessary. Hun Sen has been comparatively more successful than past Cambodian leaders in consolidating power, and is continuing to expand his domination of Cambodian politics after more than three decades.

Despite this success, Hun Sen still appears to feel insecure. His efforts to fill top government positions with family members are not simply about building a family business empire but rather about shutting down potential threats from within and without. This may explain why Hun Sen maintains a bodyguard unit of up to 6000 well-equipped and highly-paid troops.

Hun Sen’s sense of political vulnerability is also reflected in the words of Hun Manith, who reportedly said that the new General Directorate of Intelligence was designed to deal with ‘internal and external disturbance from a hostile and ill-intended group of people’ and that ‘the political and security situation and competition in the future will be more intense than in previous years’.

But Hun Sen is making the same mistake of the many Cambodian leaders before him: maximising political security by endlessly consolidating power. Hun Sen appears to believe that this strategy will continue to work for him. The problem with this strategy, though, may emerge from Cambodia’s external environment.

Hun Sen has taken advantage of the post-Cold War peace dividend and is also enjoying growing support from China. But he runs the risk of over-relying on Beijing’s support. The extent to which China is prepared to protect the CPP is difficult to determine, but what is clear is Chinese leaders’ long history of abandoning their allies when much was at stake. While Hun Sen may be aware of this possibility, his strategy to weaken domestic political challenges may increase his political insecurity.

Another problem with power consolidation through nepotism or patrimonialism is that it tends to invite resistance and opposition from both within the party and without. At some point, forces opposed to Hun Sen will grow stronger and nastier, especially if an economic downturn hits the country. And if Western democracies begin to impose sanctions on Cambodia, not only will ordinary Cambodians suffer, but the ruling elite will also face a legitimacy crisis. In this scenario, the CPP is likely to resort to even more repressive violence and may even end up self-imploding.

Current and future Cambodian leaders need to realise that security maximisation through unrestrained power consolidation is counterproductive and dangerous. Security does not necessarily result from others’ insecurity. But for this to happen would require CPP leaders to shift from a self-serving strategy to one that considers the security of others through effective dialogue and democratic power sharing.

Sorpong Peou is a Professor with the Department of Politics and Public Administration at Ryerson University, Toronto.


« VOA facebook live on 27th Anniversary of the Paris Peace Agreement on Cambodia
How to fight back against a dictator, according to an exiled democracy activist »