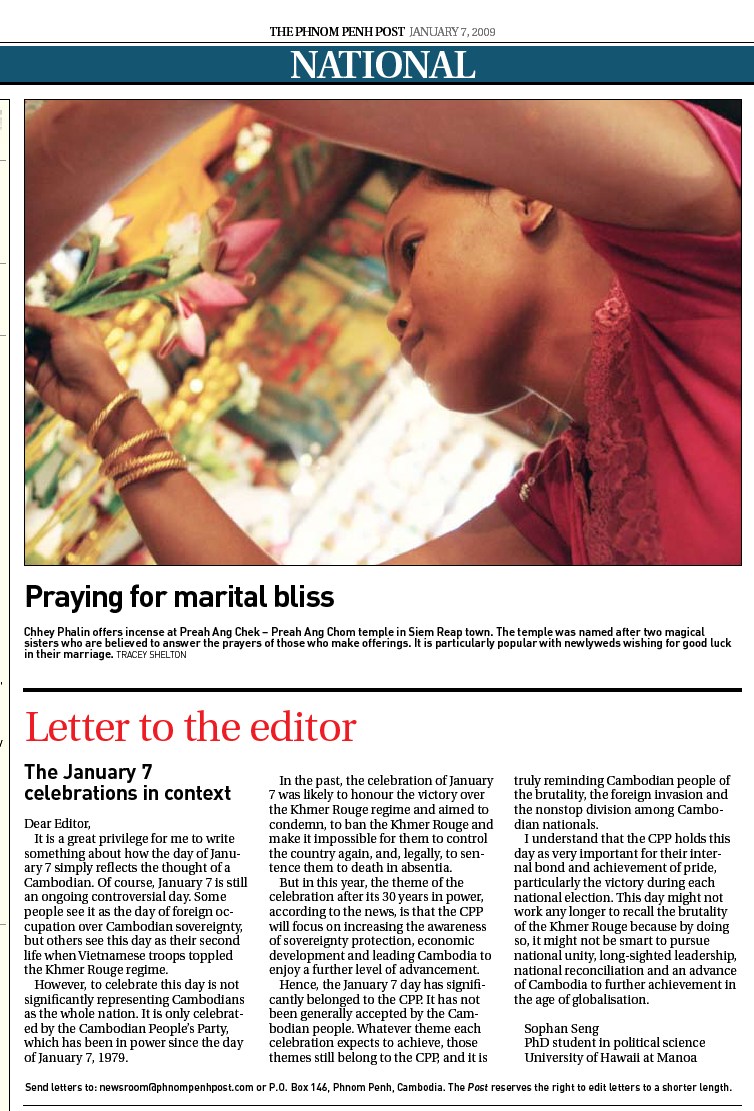 Talking about the January 7, 1979 Anniversary, personally, as a Cambodian younger generation, I am ashamed to mouth about it.

Watching this cartoon, sometime, I believe by speaking out the past, the Trauma of Cambodian people (especially my family elders) could be healed. But everything is like Adele sang that “They say that time’s supposed to heal ya, But I ain’t done much healing…” in her current popular song “Hello“.

From this cartoon, why Khmer Rouge has been stereotyped as Devil when those are also Khmers? How many generations more that Khmer shall learn to say “Sorry” and learn to “Forgive”?
There are accounts recalling the importance of January 7 day, but how much the brain of younger Cambodian generation could be developed when they are good in parroting to follow the upper echelon, or dare not question the wrong doing of the elders, or strongly believing in only one side of the coin etc. I would like to invite everyone to listen to what Sovanna’s Uncle talked through his pragmatic voice “Freedom is like racing through a mine field, it demands sacrifice…, everyone look at it (Cambodia) like a battered child who are so traumatized….”
This year, I do abstain from talking about January 7 because I have much rationale behind it:
Thus, I have closely monitored about the different themes of Jan. 7 Anniversary celebrated by the CPP. I have seen less visual theme for 2014, 2015 and 2016; but I saw some change of theme in 2009 as shared below:

Comment: as for the food of thought, article here is taken from History and the Headlines and photos here are taken from Maha Phirum Facebook and many paper works to reflect on this day at the middle. 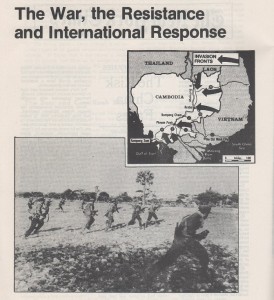 On 25 December 1978, Vietnamese armed forces invaded Cambodia, ushering in an occupation lasting nearly thirteen years. This incursion marked the first and only extended war between communist regimes and led to a brief but bloody border war between Vietnam and the People’s Republic of China (PRC). Moreover, the occupation added to the tremendous suffering that Cambodia endured during the Cold War and greatly affected Southeast Asia.The origins of the Vietnamese-Cambodian conflict are complex and reach far back into history. The Vietnamese and Khmer (Cambodian) Empires had been bitter rivals for centuries. By the early 1800s, much of Cambodia had come under Vietnamese rule or was forced to pay tribute to it. This gave rise to deep-seated animosities that survived decades of French colonial rule, Japanese occupation during World War II, and two Indochinese conflicts spanning nearly thirty years.

END_OF_DOCUMENT_TOKEN_TO_BE_REPLACED

January 7 and the Khmer Rouge Tribunal

January 11, 2012
By Theary Seng
Letter to The Phnom Penh Post

Dear Editor,
January 7 is indeed a significant day for survivors of the Khmer Rouge. It arrested the macabre convulsions that would have swallowed all of us into a hellish hole if the Vietnamese military had not intervened.
It is a bittersweet day of commemoration through invasion.
And now, unfortunately, it is a day propagandised to be solely the Day of Liberation, neatly sweeping away the equally important fact of it being simultaneously the inaugurating day of an occupation that would last for the next decade.
That occupation began with the barricading of Phnom Penh to facilitate the plundering of its wealth by convoys of trucks heading to Vietnam and the mass crimes of the K5 plan.
My hairdresser remembers returning from Battambang to his home in Boeung Keng Kang I on February 3, 1979, only to find that all the wealthy neighbourhoods of villas and jewellery stores were still barricaded off.
It was an occupation cut short only by the meltdown of the Cold War – specifically, the break-up of the Soviet Union, which funded the Vietnamese occupation of Cambodia.