Joint Statement on the Human Rights Situation in Cambodia 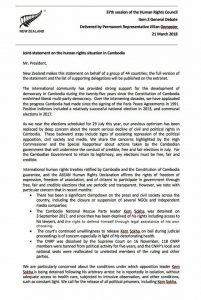 New Zealand makes this statement on behalf of a group of 45 countries; the full version of the statement and the list of supporting delegations will be published on the extranet.

The international community has provided strong support for the development of democracy in Cambodia during the twenty-five years since the Constitution of Cambodia enshrined liberal multi-party democracy.  Over the intervening decades, we have applauded the progress Cambodia had made since the signing of the Paris Peace Agreements in 1991.  Positive indictors included a relatively successful national election in 2013, and communal elections in 2017.

As we near the elections scheduled for 29 July this year, our previous optimism has been replaced by deep concern about the recent serious decline of civil and political rights in Cambodia.  These backward steps include signs of escalating repression of the political opposition, civil society and media. We share the concerns highlighted by the High Commissioner and the Special Rapporteur about actions taken by the Cambodian government that will undermine the conduct of credible, free and fair elections in July.  For the Cambodian Government to retain its legitimacy, any elections must be free, fair and credible.

International human rights treaties ratified by Cambodia and the Constitution of Cambodia guarantee, and the ASEAN Human Rights Declaration affirms the rights of freedom of expression, freedom of association, and of citizens to participate in government through free, fair and credible elections that are periodic and transparent. However, we note with particular concern that in recent months: 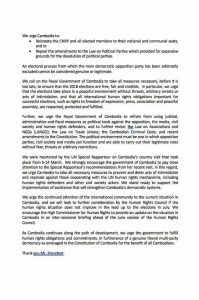 We are particularly concerned about the conditions under which opposition leader Kem Sokha is being detained following his arbitrary arrest: he is reportedly in isolation, without adequate access to health care, subjected to intrusive observation, and other conditions, such as constant light.  We call for the immediate release of all political prisoners, including Kem Sokha.

We urge Cambodia to:

An electoral process from which the main democratic opposition party has been arbitrarily excluded cannot be considered genuine or legitimate.

We call on the Royal Government of Cambodia to take all measures necessary, before it is too late, to ensure that the 2018 elections are free, fair and credible.  In particular, we urge that the elections take place in a peaceful environment without threats, arbitrary arrests or acts of intimidation, and that all international human rights obligations important for successful elections, such as rights to freedom of expression, press, association and peaceful assembly, are respected, protected and fulfilled.

Further, we urge the Royal Government of Cambodia to refrain from using judicial, administrative and fiscal measures as political tools against the opposition, the media, civil society and human rights defenders and to further revise: the Law on Associations and NGOs (LANGO); the Law on Trade Unions; the Cambodian Criminal Code; and recent amendments to the Constitution. The political environment must be one in which opposition parties, civil society and media can function are able to carry out their legitimate roles without fear, threats or arbitrary restrictions.

We were heartened by the UN Special Rapporteur on Cambodia’s country visit that took place from 5-14 March.  We strongly encourage the government of Cambodia to pay close attention to the Special Rapporteur’s recommendations from her recent visit. In this regard, we urge Cambodia to take all necessary measures to prevent and deter acts of intimidate and reprisals against those cooperating with the UN human rights mechanisms, including human rights defenders and other civil society actors. We stand ready to support the implementation of assistance that will strengthen Cambodia’s democratic systems.

As Cambodia continues along the path of development, we urge the government to fulfill human rights obligations and commitments, in furtherance of a genuine liberal multi-party democracy as envisaged in the Constitution of Cambodia for the benefit of all Cambodians. 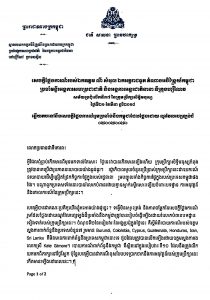 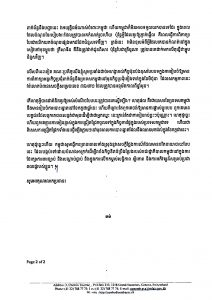 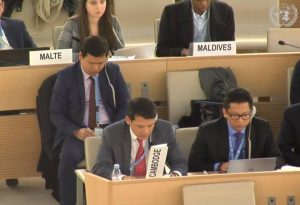