Government belongs to the Cambodian people, not to any particular political party

Political Paradigm of Pragmatism from the Khmer Youth part 104

This part (104), Mr. Sophan analysed on “Government belongs to the Cambodian people, no one can privatize government”. 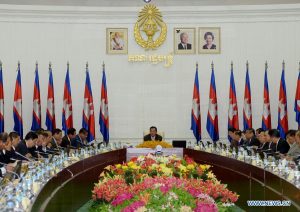 With this prudent aspect, Cambodia is Constitution-based nation. As said, political parties are just part of the nation’s actors paralleling to civil societies and other spatial communities in which hose actors are generally called “stakeholders”.

Those members of cabinet swore in to office to serve the people, to abide by the Constitution, to protect national interests, and to protect Constitution etc. Each provided royal degree to those members mean they have passed credentials, qualifications, and undertaken high esteem of responsibility in front of the King, the Cambodian people, and the Constitution.