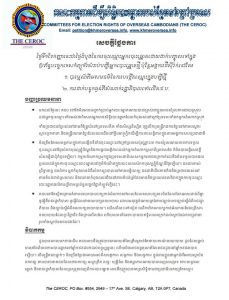 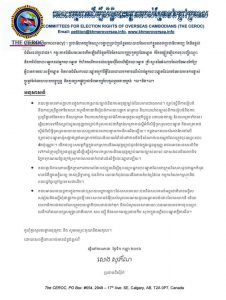 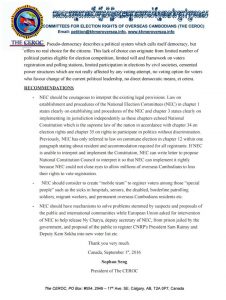 This first of September is the first day of voters registration by establishing new voter list through new technology of computer database, but The CEROC has remained:

“Khmer Spring” is not at the horizon any more in Cambodia but please be aware that “Khmer Spring” is the “people power of non-violence”. When people’s sentiment is fueled, rumors to ignite that sentiment is non-stoppable. This is becoming easily disorganized. “Khmer Spring” must be well organized in the peaceful and non-violent manner. We have witnessed “Khmer Spring” since the mass crowd of youth come out to the street to greet Khmer nationalist Sam Rainsy in his return from self-imposed exile to avoid injustice conviction of the Khmer court which it has been worldwide affirmed as “politically motivated”. We are on the right track in undertaking “Khmer Spring” by exposing the “Popular Vote”. This operation is surely a successful “Khmer Spring” of non-violence. Let keep in mind that any act (thought, speech, action) that trigger delusion and hatred will never been called “Khmer Spring”.  Delusion and hatred will cloud the reality and it can unload many dirty consequences. Bravo Cambodian Compatriots! Bravo Khmer Youth!

While Cambodian people around the world are mourning and remembering their august King Somdach Preah Norodom Sihanouk who passed away at the age of 90 on 15 October 2012, younger Cambodian generations are shocked by the death of Lim Pisith who championed to anchor Cambodian flag on the top of Himalaya mountain. Pisith came back to Cambodia with different body but his heart, bone and spirit are still Pisith, a farmer boy of Cambodia who is not defeated by the Shangri-La or a Himalayan Utopia of the world. He is among those champions of the highest top of deadly adventuring. In the pictures, his mother is hugging Pisith with love and sorrow and his remains will be altered at his hometown of Srok Puok, Siem Reap. Pisith will be missed by many of his friends and Cambodian compatriots.

May he rest in peace and realize the challenges of life Buddha taught, Nibbana.

END_OF_DOCUMENT_TOKEN_TO_BE_REPLACED 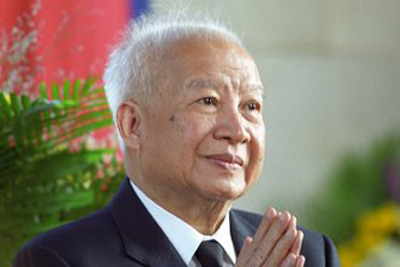 PHNOM PENH, Oct. 15 Kyodo – Former King Norodom Sihanouk passed away in Beijing early Monday morning, government officials said. He was 89.
Nhiek Bunchhay, deputy prime minister and secretary general of royalist FUNCINPEC Party told Kyodo News that King Norodom Sihanouk who is in Beijing for medical check-up died of heart attack early Monday morning.
“I have just received information from Beijing and that I was told that His Majesty (the former King Sihanouk), he had heart problem and was sent to hospital where he passed away there,“ Nhiek Bunchhay said.
Prince Sisowath Thomico, personal assistant to Sihanouk told Kyodo News, “It is true that His Majesty passed away by heart attack in Beijing at 2:25 am (Beijing time),“ he said.
“Because of his heart is weak that is why His Majesty continued to stay in Beijing for treatment since January this year,“ he added.
END_OF_DOCUMENT_TOKEN_TO_BE_REPLACED
Spread the love