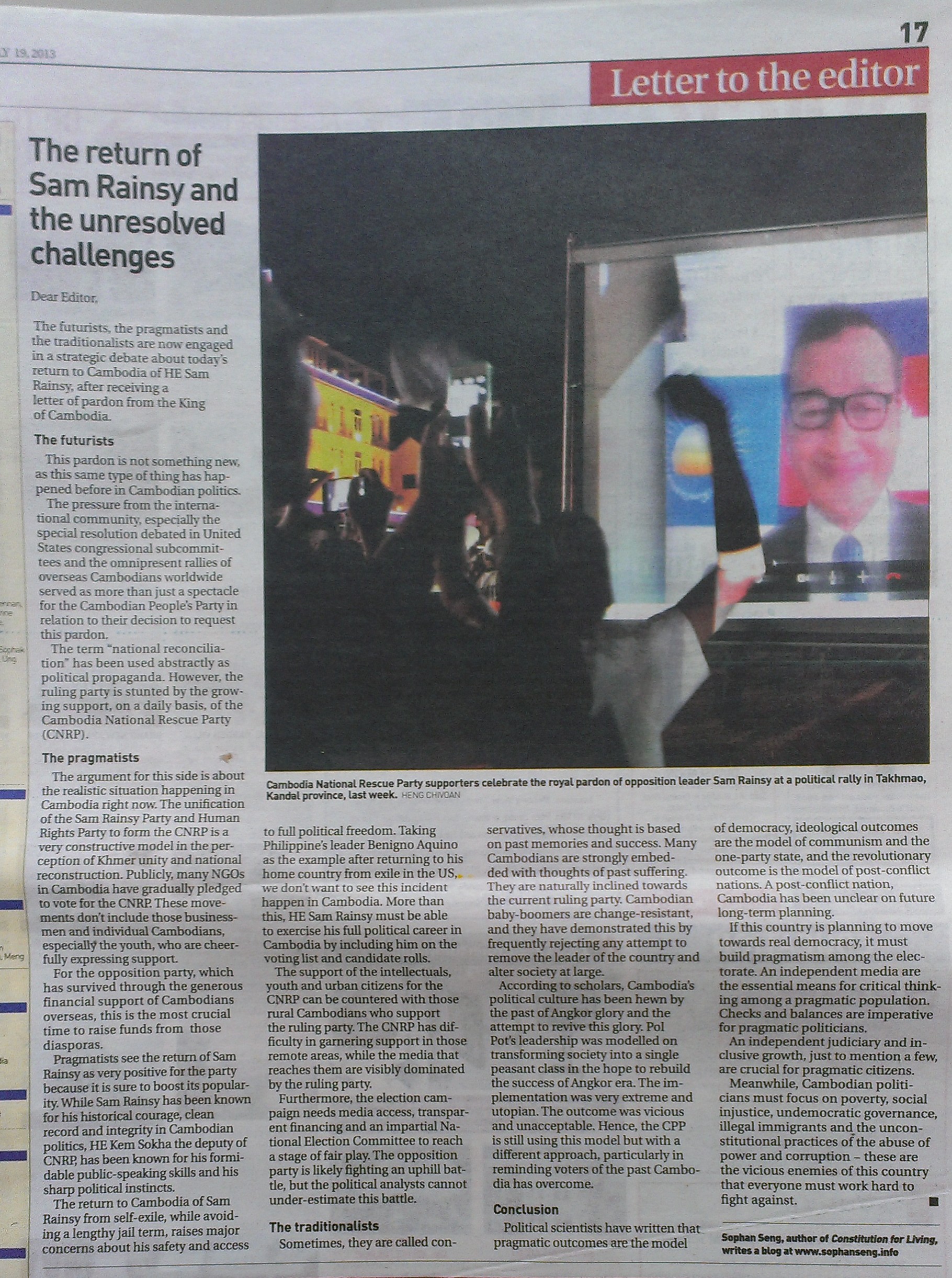 END_OF_DOCUMENT_TOKEN_TO_BE_REPLACED

Many observers have assumed current transitional Cambodian politics will gradually become mature. But I believe this is an obscure statement. If we say the tendency of Cambodian politics is towards maturity within a cave of immaturity, this might be more plausible. However, what we cannot fathom is: How bad is this cave?

Some Cambodian people and major incumbent Cambodian politicians will, not reluctantly, concur that they are very glad as a result of many new emerging things that they didn’t have during the Pol Pot period. This statement is logical, but even wise people might not see that it is still important to develop Cambodia’s political maturity.

Pol Pot came to power with the intention of restructuring Cambodian society to build a new, utopian, agrarian society. The regime’s approach has become globally recognised as “year zero”. So how wise and good can we be when the present emerging development is pragmatically compared to the “year zero” of Pol Pot? Anything now is socially, economically, politically unmatched to those of the Khmer Rouge regime.

The current Cambodian hybrid Khmer Rouge trial has solemnly proclaimed its primary mission is to enhance national reconciliation, to help heal Cambodians’ [Post Traumatic Stress Disorder (PTSD)], and to eliminate the culture of impunity. Cambodian people should not be easily exploited by the politically orchestrated attempt to disfavour the Khmer Rouge and favour the so-called Khmer Rouge liberators. In reality, we should try and achieve some insight and understanding of the fact that while the Khmer Rouge were communist, the Vietnamese who liberated us from the Khmer Rouge were also communist. They both are communist by origin. Contemporary Cambodian politicians and people have to protect themselves from both of these two disadvantaged political influences with the overall intention of truly democratising Cambodia, developing ourselves to appreciate this new political trend and nourishing the maturity of political leaders and their followers.

Regarding the political parties, no distinction can be made between government party and opposition party. These two national political parties are interdependent and inseparable. The Cambodian People’s Party (CPP) can legitimise themselves in front of the Cambodian people as well as international communities because of the Sam Rainsy Party. Similarly, the Sam Rainsy Party can have a stage to test the weaknesses and strength of their future leadership, or that of the CPP. For example, their current legal movement to reject the result of election was a brave performance.

The Cambodian people, both old and young, are observers, referees and owners of this social contract. They should not be careless and allow an imbalance of power between government and opposition to continue to happen. If such an imbalance is not dangerous per se, it is surely not compatible with the principle of liberal democracy.