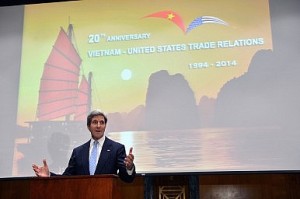 Given the projections, Cowen notes that despite the “[intellectual property] and tech criticisms of TPP,” the TPP is a “no brainer” given the “potential benefit for the ninety million people of Vietnam.”

Of course, the logic underlying Cowen’s argument also holds in a hypothetical scenario where the United States and Vietnam conclude a bilateral free trade agreement, but since that’s nowhere on the policy radar for either government, the TPP seems like the best feasible way to attain the benefits for Vietnam.

Unsaid in Cowen’s analysis is that the TPP would likely facilitate the ongoing strategic rapprochement between the United States and Vietnam. For example, late last year, the United States lifted its long-standing arms embargo on Vietnam, leading to expectations of closer ties between the two former enemies.

Finally, if one of the United States’ grand strategic goals is to uphold the liberal economic order it created after the Second World War, helping more countries adopt liberal economic standards should be a priority. Vietnam’s state-owned enterprises would have to undertake greater transparency standards under the TPP. Cowen notes—and this is probably the least convincing area of his reasoning—that the TPP would inspire broader freedom for Vietnam’s residents, including “free(r) labor unions.”

Cowen, in an aside, throws out a call to any American ‘deontologists’ among his readership to support the TPP on the grounds that the United States has been “especially unjust to” Vietnam in the past. With the 40th anniversary of the Fall of Saigon—the event marking the end of the U.S.-Vietnam War—later this week, the point is particularly salient.

I should note that none of this will probably matter in the broader domestic U.S. debate on the merits of the TPP. While there is an American national interest case to be made for enhancing the economic welfare of Vietnam and ensuring that the country has a stake in a formal liberal economic order, it is not one that will resonate with the primary U.S. critics of the TPP who continue to be primarily concerned about the agreement’s distortionary effects on U.S. workers and its perceived tilt toward the interests of large corporations.

Spread the love
Posted in Culture, Economics, Education, Environment, Leadership | Comments Off on Trans-Pacific Partnership: Do it for Vietnam
Tags: TPP, US-Vietnam