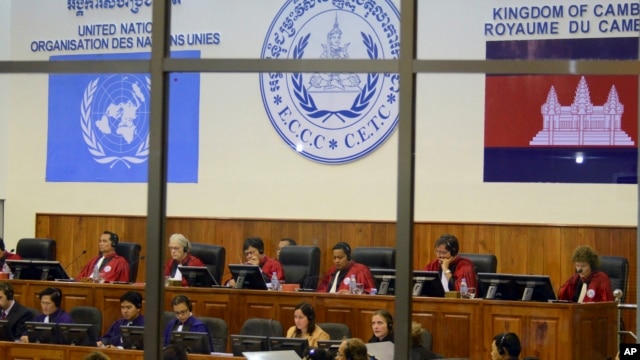 File photo of the Extraordinary Chambers in the Courts of Cambodia, court officers of the U.N.-backed war crimes tribunal are seen through windows during a hearing of former Khmer Rouge top leaders in Phnom Penh, file photo.

All suspects were named by an international judge at the Khmer Rouge tribunal in cases 003 and 004, though they have never been arrested by Cambodian authorities nor formally indicted.

That means the court has only successfully tried one suspect since 2006, the former supervisor of Tuol Sleng prison, Kaing Kek Iev. Two more suspects, senior leaders Nuon Chea and Khieu Samphan, are currently in the second and final stage of their trial at the court.

The remaining suspects say they will not cooperate with the court, casting doubt on whether they will ever be tried. 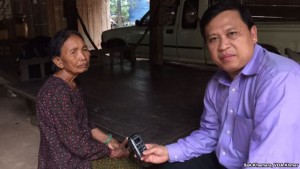 “I absolutely do not need to fight [the court],” told VOA Khmer recently at her home in Oddar Meanchey province. “I have built myself forward, through the ways of Buddhism.”

She denied any wrongdoing under the Khmer Rouge. “If I didn’t do things wrong, how can they arrest me?” she said. “It would be a human rights violation.” 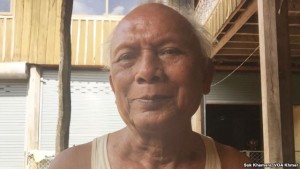 In a brief interview at his home in Samlot district, Battambang province, Meas Muth, a former Khmer Rouge naval military commander accused of grave atrocity crimes, said he would go to the court under the right circumstances. Outside his home is a sign in English, “Do Not Disturb,” which he said his son hung up. Meas Muth said he no longer comments to the media. His wife, meanwhile, chases journalists away. 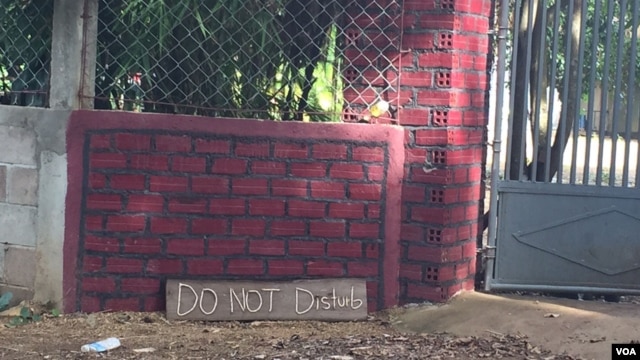 A sign in English says “Do Not Disturb” outside of Meas Muth’s home in Samlot district, Battambang province, August 12, 2015. (Photo: Sok Khemara/VOA Khmer)

Yim Tith, who is accused of atrocity crimes in the Northwest, declined to be interviewed. Neighbors say he has health problems, poor hearing and likely Alzheimer’s.

Speaking to VOA Khmer in Kamrieng district, Battambang, Ta An, 83, said he was not concerned about the court and told the investigating judge to talk to his lawyer. “Why am I not afraid? The reason I’m not afraid is that I know myself clearly. The deeds that one did should be recalled, and if I did not commit them, how can I fear Hell?”

His wife has passed away, and his daughter is married. He practices Buddhism. If the government, where he has integrated, says he is guilty, he welcomes that, but it “depends” on them, he said. 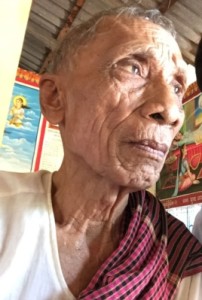 Speaking with VOA Khmer at a temple in his hometown, in Kamrieng district, Battambang province, Ta An, 83, said he is not concerned with proceedings from tribunal court, August 14, 2015. (Photo: Sok Khemara/VOA Khmer)

​Despite the denials of the suspects, there is ongoing support for their arrests. Stephen Rapp, the US ambassador at large for war crimes, said recently the Cambodian government should arrest them and begin legal proceedings against them. (Prime Minister Hun Sen has said the cases will not be prosecuted.)

Mao Chandara, director of judicial police at the tribunal, said authorities must weigh the reaction of the people to arrests. If it does harm to society, the police can reject the arrest proposal. “It is under study,” he said.

Since naming the suspects and seeing the failure of uthorities to arrest them, Judge Harmon has resigned, for what he says are personal reasons. His replacement, Michael Bohlander, of Germany, has already taken up his work, tribunal officials said.

Sok Pheap a former army commander of Khmer Rouge who is now an undersecretary of state at the Ministry of Defense, said he does not support further indictments beyond Nuon Chea and Khieu Samphan. The leadership was “the biggest engine,” he said. “For the cadre below, there is nothing to try anymore, because they were victims, as well.”