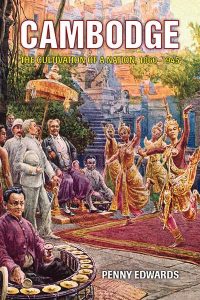 This summer, a new murder story has given Don’t think I’ve forgotten fresh traction. On 10 July, 40 years after Sinn Sisamouth died at the hands of the Khmer Rouge, public intellectual and master raconteur Kem Ley was shot dead in Phnom Penh. Where Sisamouth was killed in the darkroom of an isolationist and deeply paranoid communist regime, Kem Ley was gunned down in broad daylight in the bustling heart of a free-market democracy, while sipping his morning coffee at a StarMart.

Kem Ley’s assassination came days after the release of a Global Witness report that countered the Cambodian People’s Party repeat soundtrack of self-sacrifice with a tally of the private assets of Hun Sen and his kin. Kem Ley’s crime was not to have spoken truth to power, but to have spread that truth to the powerless, by moving such data beyond the expatriate bubble that is the standard circuitry of NGO reportage, to his nation-wide following, through aVoice of America radio broadcast in Khmer.

Within an hour of Kem Ley’s killing, hundreds had rallied to the scene. One distraught young mourner lamented via Youtube: “He was a pannavoan(intellectual)! Why did he have to die?” A marker of true stature, the titlepannavoan cannot be bought or bestowed by individuals or institutions. Kem Ley ‘had’ to die precisely because he was an intellectual, whose wisdom and outreach had earned him both audience and respect.

This was no anomaly. Kem Ley’s murder echoed the public execution of two of Cambodia’s most talented: performer Piseth Pilika, (d. 1999), and labour leader Chea Vichea, (d. 2004). Like Kem Ley, they were gunned down in the bright light of day and in the prime of life.

This was no anomaly.

Chea Vichea was shot in the head on 22 January 2004. Tens of thousands took to the streets to mourn a leader who was young, charismatic, uncorrupt, and whose vision for the future embraced the dignity and rights of Cambodia’s rapidly growing workforce. I was in Phnom Penh at the time. The grief and outrage were palpable, and the Central Market florists were barely visible behind the giant wreaths ordered in his honor. To his credit, the US Deputy Chief of Mission attended Chea Vichea’s funeral. He was the only diplomat to do so.

Rewind five years. On 6 July 1999, Piseth Pilika – Cambodia’s most beloved classical dancer and movie-star – was shot thrice in the back at a busy Phnom Penh intersection. More than ten thousand flocked from across Cambodia to mourn her loss, and to protest an abuse of power that many suspected but few dared to name: her killing had been ordered by a jealous spouse. This was no heated crime of passion. It was a calculated killing designed to protect the financial integrity of a political empire.

Piseth Pilika’s killer was never found. No arrests were made. In October 1999, the French magazine L’Express ran an excellent piece of investigative journalism, featuring the following excerpt from the slain diva’s diary: “I don’t know whether they will let me live or die, because the earth is under their control.” In 2003, the same regime that had failed to coordinate an inquiry into her murder orchestrated a sweep of city booksellers, locating and confiscating every last copy of a new publication about her death.

Spaced years apart, these killings were no isolated acts, as a glance at any Human Rights Watch or Amnesty International report will tell you. But they are the most symbolic, and they spotlight an uncomfortable truth for Cambodia’s current leadership.

Kem Ley, Chea Vichea, and Piseth Pilika – like Hun Sen and other Cambodian People’s Party stalwarts – were all children of rural Cambodia, and all survivors of the Khmer Rouge era.  Born respectively in Takeo, Kandal and Svay Rieng provinces, none were products of exile (a label often used to smear the opposition), nor were they borne to power through family nepotism. Each made their own way. As such, they were living (if now dead) proof of what Hun Sen and his party had rescued Cambodia for: the future of Cambodia. They were, in other words, the ruling party’s rhetorical raison d’être.

No leader has risen to replace Chea Vichea, and nobody has dared presume Piseth Pilika’s place in matters of the heart. It is too soon to surmise Kem Ley’s legacy. But one thing is clear. 40 years after Sinn Sisamouth’s murder by the Khmer Rouge, Hobbes’ state of  “continual fear, and danger of violent death,” prevails for those thinkers and artists in Cambodia who, like Kem Ley, dare to dream a different future.

If Hun Sen’s party is to maintain any credibility in the next national election – scheduled for 2018 – then it needs to stop protecting its elite echelons and their hired assassins, and allow new ideas and leadership skills to grow in the post-Khmer Rouge generation. They would be wise to do so. In 2018, the majority of eligible voters will have been born after the fall of the Khmer Rouge. They will have no living memory of that genocidal regime, but nor will they have forgotten the newly fallen.