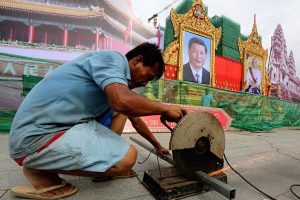 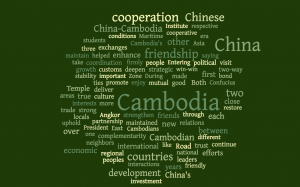 China and Cambodia are devoted friends. On issues concerning each other’s core interests and major concerns, our two countries have stood together and supported each other. China firmly supports and has assisted Cambodia in its fight for independence and liberation and to maintain peace and stability. In the 1990s, a Chinese engineering corps of over 800 men took part in peacekeeping missions in Cambodia. In just 18 months, they built and repaired the Phnom Penh International Airport and other two airports, four national-level highways over 640 km in length and over 40 bridges. With blood and sweat, the Chinese peacekeepers helped nurture China-Cambodia friendship.

We will never forget that Cambodia was among the first group of countries to establish diplomatic ties with New China when it faced foreign blockade and hostility in its early days. Cambodia was firm in supporting China’s efforts to restore its lawful seat in the United Nations. When China acted to safeguard its territorial sovereignty and maritime interests and resolve related disputes through peaceful negotiation, Cambodia did not hesitate to speak out to uphold justice. When China’s Sichuan, Qinghai and Gansu provinces were hit by natural disasters, the Cambodian royal family, government leaders and public shared our grief and extended a helping hand to us. We have a Chinese saying that hardship reveals true friendship. Similarly, a Cambodian saying goes that only in tough time can one tell a true friend from a false one. Our two peoples value their friendship and treat each other as true friends, and China-Cambodia friendship has struck deep roots in them.

China and Cambodia are good neighbors sharing a bond of brotherhood. The two countries have helped and supported each other in pursuing development and improving people’s lives. China built Cambodia’s first four-lane national highway as an assistance project and contracted to build its first cement plant, first coal-fired power plant and its largest hydropower station. The booming Sihanoukville Special Economic Zone stands testimony to fruitful China-Cambodia cooperation. By June 2016, 100 companies were operating in the zone with a total investment of US$280 million, creating over 13,000 jobs. By strengthening economic complementarity and unlocking potential, our two countries have expanded and upgraded cooperation in infrastructure, agriculture, water conservancy, energy, resources, information and telecommunications, and such cooperation projects are expected to deliver early returns.

China and Cambodia enjoy flourishing people-to-people and cultural exchanges, which have added strong momentum to the growth of their relations. Chinese experts have spent years in Cambodia to protect and restore the Chau Say Tevoda Temple and the Ta Keo Temple in Angkor. Chinese doctors have performed free cataract operations for over 1,000 patients across Cambodia. Chinese agro-technicians have passed on agro-technologies to Cambodian villagers during the day and taught them Chinese in the evening, moves that have been warmly received by the locals. The Confucius Institute launched in Cambodia in 2009 now offers classes to over 10,000 students in 14 different places. By 2015, more than 1,000 Cambodian students had studied in China on scholarship programs sponsored by the Chinese government.

Both China and Cambodia are at crucial stages of their respective development endeavor and face similar tasks of deepening reform, opening further and upgrading economic structure. Both countries are committed to economic integration and cooperation in our region. Having reached a new stage of its relations with Cambodia, China will work with Cambodia to strengthen their comprehensive strategic cooperative partnership in wide-ranging areas and at different levels so as to deliver greater benefit to the two peoples.

—We will deepen political trust. China will maintain high-level mutual visits and enhance strategic communication with Cambodia. I hope that the two countries will step up exchanges between the governments, political parties and legislatures and at sub-national levels. China will continue to support Cambodia in pursuing a development path that suits its own national conditions and firmly support Cambodia in safeguarding sovereignty, maintaining domestic stability and accelerating economic development.

—We will take solid steps to promote win-win cooperation. China will continue to enhance complementarity between our respective development strategies and launch priority projects in “Belt and Road” cooperation with Cambodia. We will, in light of local conditions, deepen cooperation in production capacity and deliver concrete outcomes in cooperation areas such as agriculture, water conservancy, infrastructure, information and telecommunications. China will take measures to increase import from Cambodia and scale up two-way trade.

–We will strengthen international coordination with Cambodia. China supports Cambodia in playing its role in regional affairs as an important member of ASEAN and will strengthen coordination and collaboration with Cambodia in East Asia cooperation, Lancang-Mekong River cooperation, the United Nations and other regional and multilateral forums to uphold the common interests of our two countries and other developing countries and build an Asian community of shared future. East Asia cooperation has entered a critical stage. We should continue to focus on the general goal of development and promote sound and steady progress in East Asia cooperation.

—We will endeavor to enhance people-to-people friendship. China will work with Cambodia to give full scope to the role of the Confucius Institute and the China Culture Center and enhance cooperation in education, culture, tourism and health. With these efforts, we can deepen mutual understanding and friendship between our two peoples, especially the young people, and ensure that China-Cambodia friendship will be passed on from generation to generation.

I am convinced that with our concerted efforts, China-Cambodia traditional friendship will bear more fruit and that we will forever be good neighbors and genuine trusted friends.


« Most beneficial merits of Pchum Ben Khmer
Xi Jinping visiting Cambodia is to engaging between state and state, not the people »